Taylor Swift’s new Netflix documentary Miss Americana is now streaming, and not only does she talk about her relationship with Joe Alwyn, she…is low key wearing an engagement ring?

During a scene where Taylor talks about breaking her silence on politics, she says “I want to be on the right side of history.”

She then lifts up her left hand and reveals a massive diamond on her ring finger. 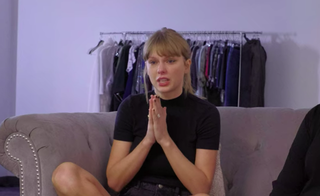 Miss Americana director Lana Wilson was asked about the moment in question during Sundance Film Festival, and remained pretty tight lipped, telling InStyle, “Whoa. I’m going to have to revisit that scene.”

Either way, Joe Alwyn was a bigger presence than expected in the documentary—he showed up on camera to give Taylor a hug after one of her shows, and Taylor was seen mouthing “I love you” to him at one point.

I kind of don’t really have the luxury of figuring stuff out, though, because my life is planned two years ahead of time. Literally, in two months, they’ll come at me with dates for the next tour.”