Plane makes emergency landing, two men arrested after a note saying ‘explosives on board’ was found in toilet of Ryanair plane

Two suspects have been arrested for allegedly making threats to endanger a Ryanair flight after the pilot was forced to make an emergency landing at London Stansted Airport after an ‘explosives on board’ note was found in the plane toilet.

According to reports, the plane, which was on its way to Dublin, in Ireland, from Krakow, Poland, was diverted after the note was found.

Upon the alert, two RAF jets were sent to help out the FR1902 flight after the captain put out a distress call while flying over the North Sea. It was then diverted to Stansted Airport around 6.40pm, where emergency services and police were on standby. 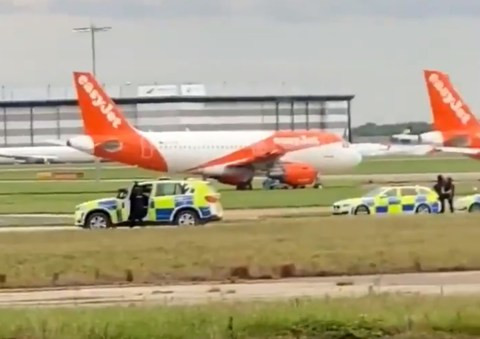 According to Essex Police, the two men are aged 47 and 26, and they have been arrested.

The police also say there was nothing suspicious on-board the flight despite the ‘security alert’.

A Ryanair spokeswoman confirming the incident said: ‘A Ryanair flight from Krakow to Dublin this evening discovered a note in one of the toilets claiming that there were explosives on board.

‘The captain followed procedure by alerting the UK authorities and diverted to the nearest airport (Stansted) where the plane landed normally but was taxied to a remote stand where passengers disembarked safely.

‘The aircraft and passengers are being checked by the UK police who will decide when they may travel onwards to Dublin on a spare aircraft.
‘Ryanair apologizes sincerely for the delay and inconvenience caused to those affected by this diversion.’