Megan Thee Stallion has issued a statement addressing the incident which landed her in the hospital, while Tory Lanez was arrested when police pulled them over following a fight that broke out at a house party in Hollywood Hills on Sunday, July 12.

Megan and her best friend Kelsey Nicole were in a car with Tory Lanez when the Canadian rapper was arrested and charged with carrying a concealed weapon in his vehicle. Megan who denied she was arrested was reported by TMZ to have suffered an injury to her foot due to broken glass and was hospitalized.

However, according to Megan’s statement, she actually ‘suffered gunshot wounds’ as a result of the crime, which she claims was committed against her. She also said she underwent surgery at the hospital to remove the bullets.

“The narrative that is being reported about Sunday’s morning events are inaccurate and I’d like to set the record straight,” she wrote on Instagram.

“On Sunday morning, I suffered gunshot wounds, as a result of a crime that was committed against me and done with the intention to physically harm me. I was never arrested, the police officers drove me to the hospital where I underwent surgery to remove the bullets. I’m incredibly grateful to be alive and that I’m expected to make a full recovery, but it was important for me to clarify the details about this traumatic night. I’m currently focused on my recovery, so I can return back to my life and back to making music as soon as possible.”

She added in a comment on Instagram, “I was never arrested. This whole experience was an eye-opener and a blessing in disguise. I hate that it took this experience for me to learn how to protect my energy.” 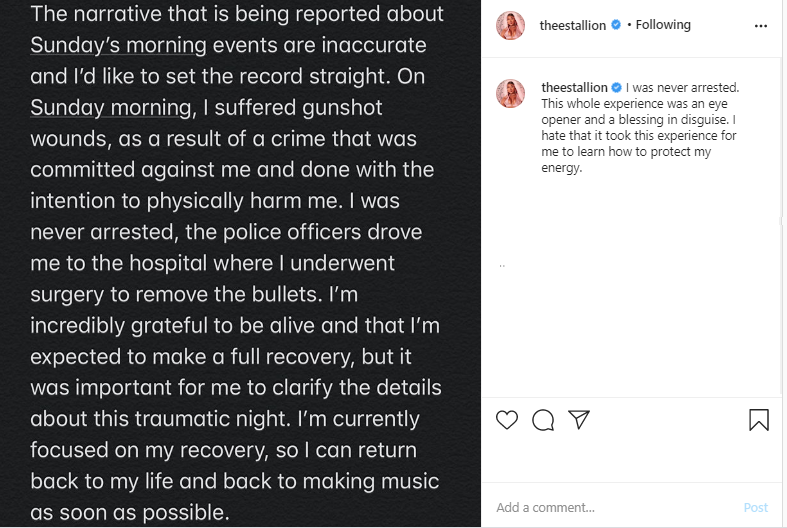 Megan did not identify who fired the shots that injured her, but it was reported that shots were fired in the air after an argument involving Tory Lanez broke out outside a property in Hollywood Hills

After releasing the statement, a spokesperson for the LAPD told TMZ that Megan never told them she was the victim of a crime.

The spokesperson said, “At the time Megan Thee [Stallion] was with police she did not report that she was the victim of any crime. And the LAPD has not received any additional information at this time.”