Chris Evans sends a sweet message and makes promise to a little boy, who saved his sister from dog attack (video)

In his message, the actor promised to send the boy an authentic Captain America shield for his courageous act.

“Pal, you’re a hero, what you did was so brave, so selfless…your sister is so lucky to have you as a big brother. Your parents must be so proud of you,” Evans said in a message to 6-year-old Bridger.

He added that he’d send Bridger “an authentic Captain America shield because pal, you deserve it.”

“Keep being the man you are, we need people like you,” Evans continued. “Hang in there, I know recovery might be tough, but based on what I’ve seen, I don’t think there’s much that can slow you down.”

The cute video was shared by Nicole Noel Walker, Bridger’s aunt who first shared the story of her nephew’s bravery.

READ ALSO: Okonjo-Iweala lists why she is the best candidate to head World Trade Organisation (WTO) 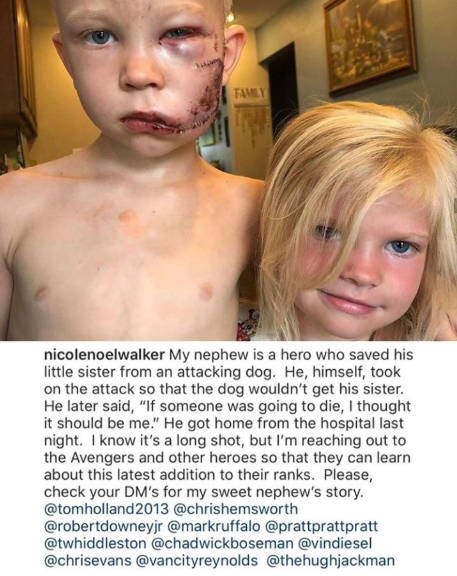 She captioned it: “Conversation with Captain America. There are no words. We are so, so thankful.”

Fittingly, Bridger wore a Captain America costume in the video, which showed him reacting to Evans’ message in-real time.

Chris Evans is not the only superhero actor who has celebrated Bridger. The Hulk has also congratulated Bridger on his bravery. Mark Ruffalo was one of the first celebrities to respond to one of Walker’s original Instagram posts, praising the boy as “more of man than many, many I have seen or known.”

Numerous other onscreen superheroes celebrated Bridger, including Robbie Amell (who plays Firestorm on The Flash), Brie Larson (who plays Captain Marvel in the Marvel films), and Grant Gustin (who plays the Flash on The CW).

Below is a video of Chris Evans’ message to the brave boy and his reaction to it:

Captain America actor, Chris Evans sent a sweet message to 6-year-old Bridger who bravely fought off a dog to protect his sister. . In addition to the message, Chris also promised to send the boy an official Captain America shield.