A security guard identified as Solomon Ede has died after he allegedly slept wearing his face mask in his place of work in Alako area of Abeokuta, Ogun State on Friday, August 28.

The Nation reports that Solomon was well known in the area for never failing to wear his face mask as part of measures to protect himself from contracting the dreaded Coronavirus. However, on Friday, the 50-year-old had a few glasses of local gin popularly known as Ogogoro before going to bed. He went to bed with his face mask on. 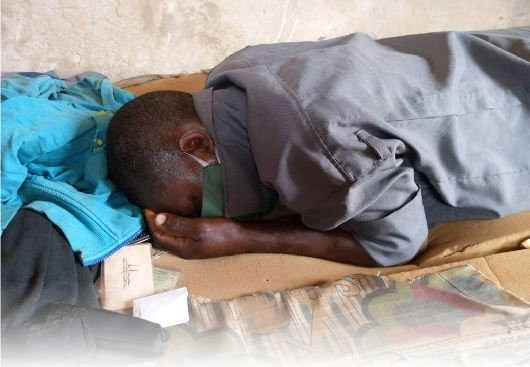 His lifeless body was discovered face down, suggesting that he died of suffocation from the face mask. Neighbors who came to fetch water at the compound of the house where the deceased worked, banged on the gate of the building endlessly but late Ede did not come out to grant them access to the tap.

It was said that the noise at the gate of the building alerted late Ede’s boss who opened the gate for the visitors and decided to check on Ede in his room. He noticed that the door was locked so he forced it open only to find Ede lying face down on the bed lifeless and with his face mask in place. The boss was said to have raised the alarm which attracted other residents to the building, with many blaming the deceased’s tragic death on his obsession with alcohol.

“But for the noise from those who came to fetch water in the early hours of the day, no one would have known that a tragedy had occurred.

It was when the deceased failed to come out of his apartment to attend to those fetching water in the premises of the house that his boss came out and discovered his body.”

Shocked by the discovery, the deceased’s employer reported the matter to a police division at Kemta, Idi Aba.

Residents of the area claim the deceased took to alcohol after suffering depression. He was said to have been warned by his employer and others to desist from his habitual abuse of alcohol.

“He usually removed his face mask before going to bed. But he took some ogogoro late in the evening and was downcast. Those who saw him at the entrance of his apartment asked him to remove the mask on his face and go to bed, but he refused.

”However, he went to bed forgetting to remove his face mask and slept face down. He was probably choked to death by the face mask,” one of the residents who spoke on condition of anonymity said.